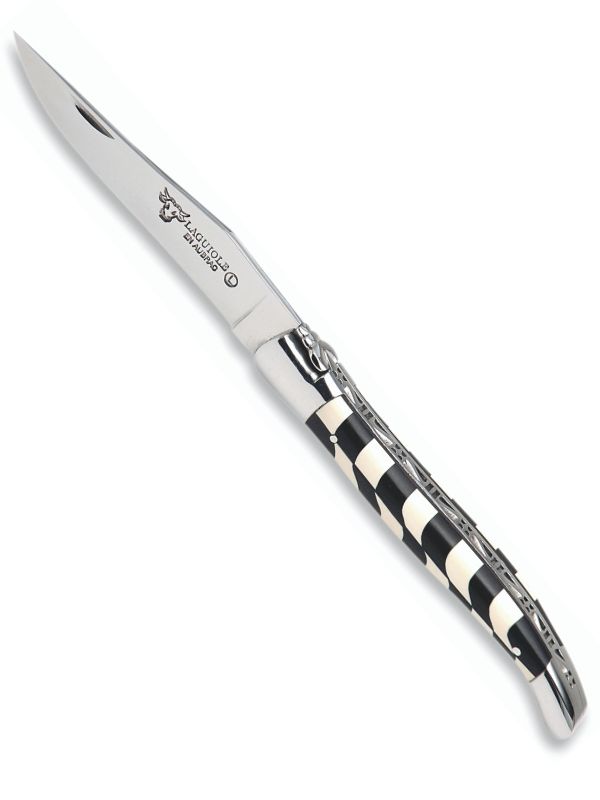 the excellence of a handcraft knife maker

Ancestor of marquetry, this technique appeared during antiquity, it consists in inlaying various materials such as mother-of-pearl, stone or mammoth ivory. At that time, marquetry was mainly found on buildings.
Italy revolutionized this technique by applying it to furniture in the 14th century. Thus we find the name of “wood painting” to designate marquetry.

In France, it was André-Charles Boulle, master cabinetmaker who developed an existing technique called Tarsia a incastro which revolutionized the practice of marquetry. In this method, all the veneers are stacked in a bundle. Then comes the cutting of each shape with the scroll saw known as bocfil or with the “marquetry easel” which has a very fine blade; the whole is cut with a saw. During assembly, a clear veneer is obtained which becomes embedded in the dark wood and vice versa.

Elaboration of the Marquetry in video

The marquetry is a decoration made with cut or inlaid veneers according to a design, then amalgamated with a support. The results obtained can be geometric figurative or abstract.

Our selection of marquetry 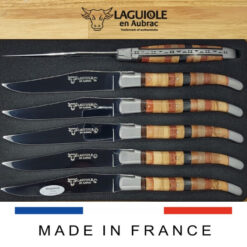 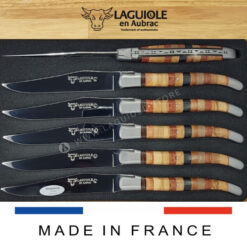 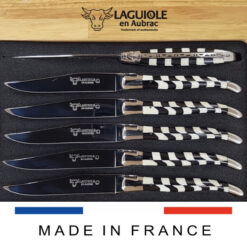 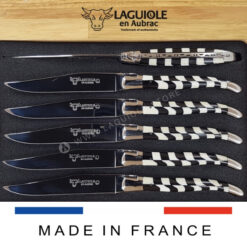 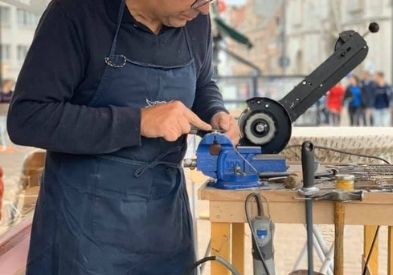 Under the direction of the workshop manager: Thierry Valat, Laguiole en Aubrac in addition to his carpentry workshop and his forge, obviously has his Knifesmiths workshop. In which each knife is assembled by the same craftsman cutler. 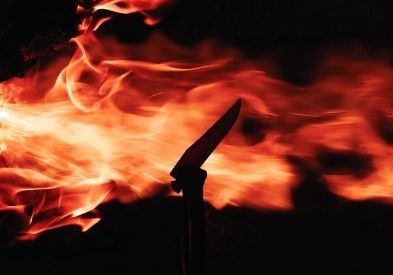 The work done at the forge of Laguiole en Aubrac produces all the metal elements that make up the knife before arriving in the hands of the cutlers who will undertake polishing and the finishing stage. 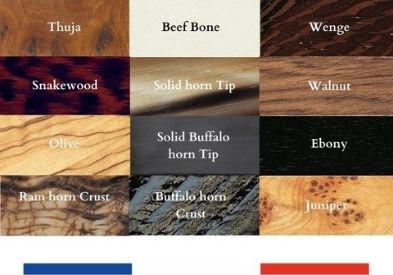 The handles can be made in many different materials: Wood, Horns, Bones, Mammoth ivory, mineral materials or even synthetic materials. We have selected the most beautiful!

Laguiole: The answer to your questions

Not enough time to read each of our pages? We have made a Frequently Asked Questions at the bottom of our pages to provide an answer to the most frequently asked questions!
What are the guarantees on a Laguiole Marquetry knife?

The warranty on Laguiole knives with marquetry handles is exactly the same as on all of our products. They are however more fragile if ever they were inadvertently immersed in water. We recommend that you never immerse your knives in water.

What type of inlays are made on the Knives?

We have selected for this site the most affordable and classic inlays: Checkered, woodstock and “dodu” with their wider handles.

Are the inlays made by hand?

Yes, all the inlays are handmade by the workshop manager Thierry Valat.